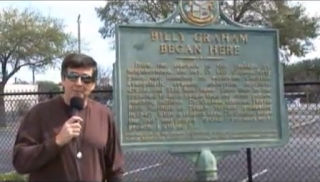 It has been my privilege to do a lot of street evangelism over the years.  Starting on the streets of San Francisco back in 1985, from my nightly television ministry in Northern California, we have seen God move with a special anointing on the hearts of the homeless and broken.  This old video shows the outreaches we did for several years in downtown Tampa at Tampa Street and Florida Ave.  Taking food, clothing and the love of Jesus to those who live under bridges and in parks along the river.  This monument to Billy Graham states that he started his ministry in the same place as our outreaches.  We called it "Church on the Streets" and for years and our congregation on Saturdays were those who were basically outcasts.  God is good and we touched many lives.  Every week multiple salvations, healings and deliverances.  God taught me much about the principles of the kingdom of God through these wonderful people.  It was said of Billy Graham, by his own testimony, that he was literally thrown out of a bar for witnessing in the very same area.  God used the Tampa bay area to launch Billy Graham's wonderful ministry.  He attended bible college in Clearwater as well.  Praise God for the blessing that later came on Billy's world evangelism.  May his inspiration stir a new move of the Holy Spirit in the season of celebrating Billy's "home going"!  He himself said, I won't be dead, but translated into my greater place of blessing and glory.  Thank you Billy for your beautiful example of integrity and longevity.

Posted by Unknown at 1:28 AM No comments:

The Great Commission - The Great Omission? 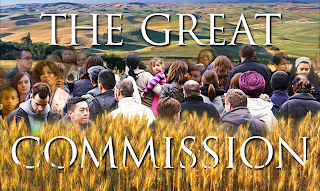 Has the great commission become the great omission? Why has the church not completed the harvest of the nations after 2000 years of technology and mission work? Should that concern us?  What can we do?  Why did Jesus say He would not come back until this is done?  If this is the main thing that Jesus said we must do, why have we not done it? 66,000 people die each day never hearing the name of Jesus one time! Jerry gives direct and passionate answers to these questions... but with a plan of action that could complete the harvest by the end of 2020!  A remarkable and practical solution to the last command of Jesus on earth before he left.  There are four tenets that Jesus gave that guarantees the completion of the "Great Commission".

The amazing truth is, Jesus will never have more authority over the earth than He now has.. it has already been given to Him. But we must enforce it by pushing back the darkness with the light of the glorious gospel!  Let's go do it!