Jesus never asked for a majority vote of the disciples!  Peter withstood Him to his face and tried to stop Jesus from even going to Jerusalem, much less dying on the cross.  Thomas doubted even after the resurrection.  Most followed Jesus afar off when the crisis of the crucifixion trial was happening.  But Jesus never waivered!  He knew who He was, why He was here and what He came to do.  "The Son of Man has come to suffer once for our sins and fulfill all righteousness".  Jesus followed another voice... the Father's.  He never moved or did anything without first confering with the Father.  "Jesus said, all that I do the Father shows me".  (John 12).  When God was ruling Israel through Samuel the prophet.. God was king of the nation.  The majority voted and elected to have another king.. Saul.  God abdicated and gave them what they asked for.  But God said you will get your king, but he comes at a price.  Your earthly king will make your sons and daughters his servants and you will loose your freedom.  But they chose Saul anyway.  God lifted His hand off of Israel.  Remember for 40 years the Philistines could not attack Israel under Samuel the prophet because "The hand of the Lord was against the Philisintes all the days of Samuel the prophet." (I Samuel 7) But after Saul became king, the Philistines immediately were allowed to attack.  Even the heads of Saul's army followed him trembling.  When God was declared to be over America.."one nation under God" we have experienced 200 years of blessing, protection and prosperity.  Our future depends on God's hand upon us and against our enemies.  We stand in the balances of going off more than a fiscal cliff, but a moral and spiritual one.  History shows that the majority don't get it done.. but individuals who were willing to take their stand.  What the army of Israel could not do against a giant, one boy, David, did with a sling.  When Israel stood at the edge of extension from Haman's hand, one woman was willing to offer her life to the king.. Esther.  Who will stand today?  Thank God for the owner of "Chick-fil-a" who put his business at risk to take his stand.  No the majority won't get it done, but individuals who will rise up and speak for truth.
Posted by Unknown at 9:24 AM No comments: 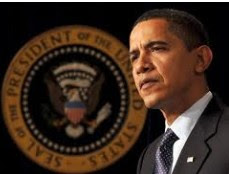 We have just come through an election.  America has spoken and Obama is president for another term.  What does that mean for kingdom businesses in America.  At this point it is not important that you did or didn't vote for him.  What is important is he is in for another term.  What should our response be?
1. We are to pray for those in authority.  Jesus was sent "in the fulness of time" to a government headed by Herod.  This is no reference to Obama, but here was a man who was willing to kill all the children under 3 years old from the city of Bethlehem that threatened him.  So God is above and beyond any human institution or government.  His kingdom prevails regardless of who is in charge here and the "Kingdom of God" cannot be shaken!  God's purposes will be fulfilled and nothing and no one can stop it.  His kingdom is driven by His own "zeal" as it says in Isaiah 9:6 "The zeal of the Lord will perform it".
2. We should be speaking "blessings" toward our president.  I am personally troubled and at times grieved by those I hear that speak curses over our president continually.  Remember the bible says, "The power of life and death is in the tongue".  We should be speaking "blessings" over our government leaders.  Declarations that God's will shall be accomplish "on earth as it is in heaven."  I believe we are coming into the greatest season of Kingdom Business blessing in America that we have seen.
3. We should make ourselves "Prophetically" available to kings and those in authority.  God used prophecy with Pharoh to bring the wealth of the world to Egypt during the 7 years of plenty.  The wealth that later became Israel's as they "borrowed" it before they left.  We can be a prophetic voice to America's leaders that will release enormous wealth and blessing on our nation.  Daniel influenced Nebuchadnezzer and interpreted his dream.  We don't gain influence by cursing our leaders, but by being available to prophecy over them.  How about some testimonies from Washington that God brought enormous blessing to our country because someone spoke prophetically.  Now is our time... true church arise!   Kingdom Businesses get ready for God's outpouring and anointing for the next 4 years.