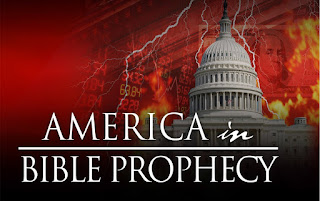 Three times in Daniel chapter 8, Daniel is told by the mighty angel Gabriel, "This is for the times of the end." (v - 19, v 23a & 23b)  The early chapters of Daniel give us the history of what is known as the "times of the Gentiles" on earth. The four kingdoms that began with the Babylonian, then the Medio - Persian, then the Grecian, and finally the Roman.  But these kingdoms will culminate with the rise of one powerful leader called the anti-christ. The beasts of Daniel are not only pictures of both the ancient empires, but also a picture of end-time key nations.  The lion with eagle wings is England, the eagle's wings break away and becomes America, the eagle sign, followed by the bear, or the sign of Russia and finally the leopard or Germany.  These become central powers in the end-time purpose of God. The anti-christ will arise during the existence of these major powers and form a one world government, religious system, economic system that Revelation calls Babylon. He, the anti-christ, makes a covenant with Israel to rebuild the 3rd temple, but in the middle of the 7 year peace agreement, the anti-christ breaks the covenant and establishes an image of himself in the holy of holies.  This is called the "abomination of desolations".  Jesus referred to this in matthew 24:15 - 16 "Therefore when you see the 'abomination of desolation', spoken of by Daniel the prophet, standing in the holy place, 'Then let those who are in Judea flee to the mountains'" Jesus clearly taught that this would happen at the "times of the end".  This is the signal for Israel to flee from the coming persecution in Jerusalem that the anti-christ will bring.  Then Jerusalem will be destroyed for the last time.  Nations will gather against her.  But soon after, at the "second coming of Christ", the city will be rebuilt for her final eternal glory.  Christ will reign from Jerusalem as heaven joins earth and the "New Jerusalem" descends from heaven and Christ reigns over planet earth with his bride, the church of both Jews and Gentiles, reigning with Him for 1000 years. America is seen as a key ally of Israel.  One reason America has been raised up is to provide a friend to Israel and a place of sanctuary for the last several hundred years.  America will also realign with Israel strongly in the times of the end. This will bring blessing on America.  Donald Trump has already strongly suggested this. Obama has again tried to sell Israel down the tubes by voting in the United Nations for the Palestinian state and the recent stopping of building her rightful dwellings on the West Bank. I praise God thanking Him for raising up Donald Trump as a leader who, I believe, will renew our commitment to Israel. I also believe that the vision of the Ram and Goat in Daniel 8 is the struggle between Islam and the Western culture. Could the two horns of the Ram be the two divisions of the Sunni's and Shi'ihites? If so, the Ram will in the end destroy this world-wide influence.

Posted by Unknown at 8:41 AM No comments: 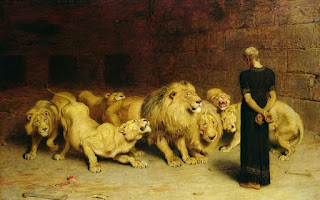 The only person that slept the night Daniel was in the lion's den was Daniel!  Darius could not sleep and his mind was troubled. Darius refused the nightly music instruments that usually played before his bedtime.  Darius fasted and would not eat.  Darius was waiting to see if the God of Daniel was greater than any other. The 120 Satraps had deceived him into throwing Daniel in the lion's den. But in spite of his troubled heart, he knew God would deliver Daniel.  He arose early in the morning and came to the den and said, "Daniel, servant of the living God, has your God, whom you serve continually, been able to deliver you from the Lions?  Daniel said to the king, 'O king, live forever! My God sent His angel and shut the lions' mouths, so that they have not hurt me.'"  Our integrity protects us from the enemy.  Daniel said, "Because I am innocent before the king, God has delivered me."  The world is looking for people of character who stand for truth.  Darius then took the 120 satraps that had accused Daniel and threw them and their families into the lions den.  The way we handle adversity defines our faith and then our faith witnesses to the nation.  It only took one man who stood in the middle of three great world wide kingdoms of Babylon, Medes & Persian and lived through four kings, to change the hearts of those kings to declare that the "God of Daniel is the only one who delivers.  For this God has a kingdom that will not be destroyed, a kingdom that has dominion over all mankind. He is the only one who can perform signs and wonders."  Nebuchadnezzar, Darius and Cyrus all ended up declaring this!  How many people does it take to transform a nation?  Apparently one!  We little understand the authority we carry on earth.  Daniel understood and never wavered from his heart convictions.  Daniel made the decision when he was a teenager and was first taken into captivity. "Daniel purposed in his heart that he would not defiled himself with the king's meat or with the wine which the king drank."

Daniel In the Lion's Den

Posted by Unknown at 7:42 AM No comments: 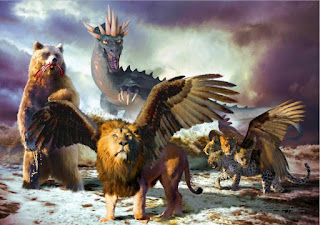 In the first year of Belshazzar Daniel had a dream.  This is one of the most powerful chapters in the Old Testament.  It carries the key to all future prophecy and the kingdom's called "The Times of the Gentiles".  Daniel received a great vision of four beasts coming out of the sea (humanity).  The lion who's wings were clipped who was Nebuchadnezzer, the bear who was the Medo-Persian kingdom, the leopard, who was the Grecian kingdom and the fierce beast with 10 heads and 10 horns which was the Roman kingdom leading up to the anti-christ.  Here the "little horn" or the anti-christ enters the world scene with great violence, authority and power. The next chapters of Daniel will be dealing with the rise of the anti-christ's rule and his destruction by the bride of Christ.  It is the saints that destroy the anti- christ and move the transition of all world governments under the kingdom of God at the time of Christ's coming.  The earth has God given to the "sons of men".  The bride of Christ is now in a time of training, purification and readiness to rule planet earth under the kingship of Christ. The anti-christ is actually used by God for this tribulation and persecution that makes the bride ready. This is found in Daniel 11:32-35 "But the people who know their God shall be strong, and carry out great exploits.  And those of the people who understand shall instruct many; yet for many days they shall fall by sword and flame, by captivity and plundering.  Now when they fall, they shall be aided with a little help; but many shall join with them by intrigue.  And some of those of understanding shall fall, to refine them, purify them, and make them white, until the time of the end; because it is still for the appointed time."  The saints and the true church has always grown under persecution. The anti-christ doesn't know it, but his attack during the last 3 & 1/2 years of the tribulation will be a great time of preparing the bride for our earthly reign with Christ.  Remember, "All things work together for good to those who love God and are called according to His purpose."  Get ready saints of God, for our best season is coming.  Our real time of harvest.

Daniels Great Vision of Four Beasts & The Throne of God 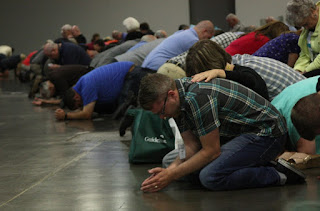 No need to pray for revival in America!  It's already here.  Evangelist Daniel McGehee is seeing astounding results in rural America.  Going to places that are unlikely, remote and often overlooked, he is seeing thousands come to Christ in small communities and country rural villages. With a deep southern drawl and a heart of passion, Daniel pleads to the church to now mobilize and reach their area.  "Something has been released in the heavenlies that is pouring out fresh fire on America" He cries.  He admits that the time is short and this may be the final wave of revival for our nation. "We must strike while the iron is hot and win as many people to Christ as we can." is his plea. Action Evangelism and Kingdom Life University is committed to support and promote this move of God. We are looking at the best ways to multiply Daniel's anointing by training evangelism teams under his his teaching.  Churches can send their evangelism team to spend a week with Daniel in one of his revivals.  Churches are growing with amazing results. Several in the Belle Glade Florida area grew from around  100 in attendance to over 300 in just a matter of weeks.  The blessing is the people are sticking and becoming a part of the church life.  God has downloaded Daniel with simple, powerful strategies for church evangelism and growth.  You can get your church involved and simply scheduling your evangelism team to work with Daniel and be trained.

Posted by Unknown at 7:30 PM No comments: