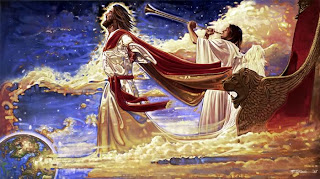 The book of Revelation is Jesus "Action Plan" to transfer all authority and human governments over to His bride, His church. Following His "Second Coming" the church will rule and reign "on earth" with Him for 1000 years. The book of Revelation is future and describes in great detail how the time of "Great Tribulation" will break the back of the anti-christ, false prophet and the Babylonian system of international finance.  People complicate this powerful book and make it seem too hard to understand. I believe anyone that seeks to understand this book will receive "the revelation".  I believe that the church will be present on earth during this time to release through worship, proclamation and prayer the fulfillment all the seals, trumpets and bowls that Revelation speaks about.  Just as Moses streteched forth his rod of judgment on Egypt, the church will stretch forth powerful prayers and declarations over the earth.  International prayer movements will prevail during the "Great Tribulation" through tremendous times of natural disasters, wars, famines, pestilences, and resistance by evil governments to submit to the ruler ship of Christ. These prayer movements are spoken about in  Rev. 5:8 "And when he had taken the book, the four beasts and four and twenty elders fell down before the Lamb, having every one of them harps, and golden vials full of odours, which are the prayers of saints.".  It is the prayers of the saints all through the book of Revelation that release the judgments on earth and bring forth Jesus "Action Plan".  Just as Moses prayed for the plagues of Egypt to stop, so the church will pray for these judgments to stop and they will.  We will initiate the plagues and stop the plagues under the leadership of the Holy Spirit instructing us how to pray.  Why will the earth feel such judgment during this period?  Because God is cleansing the earth of all that hinders His righteousness and love! What will happen to the true people of God during this time?  God will place a seal of protection around His own. A chosen number in Israel, 144,000 and also all the Gentiles who walk in victory will have this seal of God upon them and Satan's rage will not touch them.  Even though there are martyrs mentioned, it is definitely a sub-theme of Revelation. There will also be "zones of God's glory" on earth and some nations and cities will not be under the judgments felt in the rest of the world. Some judgments are so awesome that 1/3 of the worlds population will die.  Billions will die during this time.  They, like Pharaoh, will harden their hearts and curse God.  But even death will take a holiday in one period of time. Hordes of demons will be released from hell and the demonic forces from the second heavens will be confined to earth along with Satan.  Satan only desires to murder and destroy even his own. So His wrath will be fully revealed.  I will be teaching shortly on this powerful book of the "Revelation of Jesus Christ".  We will have a much deeper understanding of who Jesus is and His "Action Plan" for the end of this age through this study.  Tune in to Wednesday mornings at 10:00 am live for this live study. LIVE STUDY LINK  Following the completion of the book of Matthew we will go into the book of Revelation.  He that has ears, "Let him hear what the Spirit is saying to the church.. for he that overcomes.."  This is mentioned 7 times.  So join us and be one that "Overcomes".  We must prepare our businesses for this coming time.  I will be sharing an "Action Plan" that I believe will do that during this teaching.